A long time ago, at a company far far away… The Atari Years continue.

There are a number of Star Raiders websites, with reviews, tutorials, game play tips and history. So, I thought I’d try to do a page with some insights and trivia behind the design of Star Raiders. 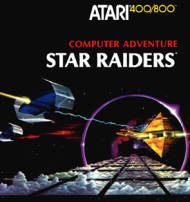 Whenever you press a key you’ll hear a “3 beeps sound“.

The sound comes from the Star Trek TV show. I forget which episode, but I think it’s the one with the two half-white/half-black guys who are trying to kill each other.

For some reason or other Kirk, Spock, and Scotty are getting the computer to blow up the Enterprise. The computer made the 3 beep sound as sort of an acknowledgement.

I don’t know, you’d think they’d come up with something better than 3 beeps, for example…

Kirk: Computer, blow up the ship.
Computer: Are you sure? (y/n)

If you hit a wrong key, the computer would display the message “What’s Wrong?”.

Which actually doesn’t make a whole lot of sense, but it’s my homage to George Lucas’s THX 1138, which I wanted to fit in somehow.

The correct response is “Never mind”, or “Nothing really”.

When you dock at a star base a little re-supply ship comes out of the star base and refuels and fixes any damage on your ship.

Originally, I wanted to be able to fly into the star base, but I didn’t have nearly the bytes available in the cartridge to pull that off. I tried using some of Antic’s different graphic modes, but the star base ended up looking like a clunky “blocky” Atari 2600 graphic.

I tried having the star base shoot out an energy burst (re-using the hyperwarp graphic) to refuel your ship, but as Atari technician Steve Smith said, “That’s really lame”.

In desperation the light bulb finally went on and I thought of the little re-supply ship. Everyone liked it, so that’s what I ended up using.

I wanted to use as the screen saver the flying through space star field display (which is what ended up in the game), but there was a problem.

Atari had a “standard” screen saver mode in which you alternated through all the colors (and was a pain to implement and didn’t look very good IMO). So it was necessary to get an exemption to use the star field.

Now days of course the “star field” is one of the standard screen savers on a Windows computer.

The photon graphic is actually the meteor graphic. The “sparkle” effect is created by taking the output of the Pokey random number generator and “Anding” it with the meteor graphic every frame (1/60 of a second).

I originally wanted the color of the shields to be a dark blue/greenish color (Like the picture on the Left), but depending on the color settings of your television, the shields will appear as green (Right).

Actually the color on the left isn’t quite right either, it should be dark blue (with a hint of green) color.

When I first designed the Zylon “brains” section it was fairly sophisticated. I quickly realized however that a mere human has no chance against a computer with reflexes on the order of 1/60th a second.

So I had to “dumb” down the Zylon brain to something on the order of a turnip. This gives the human at least a fighting chance.

Which I always think of when watching a Star Trek episode. Trying to manually fly/shoot at Warp speeds…

When I first tried to develop the “surround star base algorithm”, the Zylons would often tend to annoyingly lock up in a “traffic jam”. They would get stuck and couldn’t “unstick” themselves.

After various tries, I finally came up with a simple solution by adding a bit of randomness to their “surround the star base” algorithm. It was kind of a primitive form of Simulated Annealing.

The Zylons wouldn’t always find the most optimal path to the star base, but they’d be guaranteed to eventually get there.

Originally, I wanted the sound from Star Trek. (Which is also the same sound as from the 50’s sci-fi classic “War of the Worlds” by George Pal.)

I actually went so far as to jury rig a sound capture input to the Atari 800 paddle ports and grabbed the sound. But it took far too many bytes to implement, so I came up with the final sound using the Pokey audio circuits.

Note: The Shields color on the video below is Perfect!